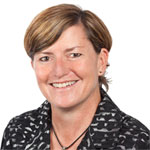 Councillor Christine Forster was elected to the City of Sydney Council in September 2012, and re-elected in 2016.

Prior to joining Council, Christine had a long history of involvement in her local community, participating in a wide range of volunteer and charity work since the early 1990s, including more than a decade in elected leadership roles and managing a community-based childcare facility.

Christine has a degree in economics and worked as a journalist covering the Australian petroleum and mining industries until 2016. She is currently employed in the corporate affairs department of Woodside, Australia’s largest independent oil and gas company. She is also a regular commentator on politics and current affairs in a variety of print and broadcast media.

Christine is passionate about Sydney and is committed to helping make it the world’s best place to live, work and visit. She believes local government must respect and listen to all its constituents and deliver sustainable infrastructure and services that help communities to thrive and prosper.

In 2016, Christine was elected as a metropolitan director on the board of Local Government NSW. She is currently the Chair of the City of Sydney’s Floodplain Risk Management Committee, the City’s representative on the Southern Sydney Region of Councils, an Ambassador for Pride in Diversity’s Sapphire Program for lesbian, bisexual and transgender women in the workplace, and an Ambassador for the Waterline Challenge Foundation, which raises funds for a range of charities.

Christine has four children and lives with her wife Virginia in Surry Hills.