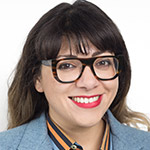 Deputy Lord Mayor Jess Scully is a curator, cultural strategist and creative industries advocate who is passionate about connecting people with creativity and empowering them to participate in the life of their city.

From 2009 to 2017 Jess was the founding director of Vivid Ideas, Australia's largest creative industries event, a 23-day event which enlivens the city with talks, workshops, exhibitions and events. Jess has curated creative sector events including Junket, TEDxSydney and Curating Participation. As a cultural strategist Jess was a founding contributor to the Sydney Culture Network, co-ordinated by UNSW Art and Design, launched in late 2017.

In 2019, Jess was elected as Deputy Lord Mayor for the City of Sydney. She is also the Deputy Chairperson of Council’s Corporate, Finance, Properties and Tenders Committee and a member of the Central Sydney Planning Committee.

Jess is an advocate for the knowledge economy, creative and cultural sector, and encouraging participation in politics, creativity and enlivening our public realm. As a public art curator, her projects included Green Square Library and Plaza. She has served as an arts policy advisor to the NSW Minister for the Arts, directed the Qantas Spirit of Youth Awards and the Creative Cities East Asia project, established 2SER’s so(hot)right(now) weekly arts radio show, and began her career as editor of creative industries publications including Yen, Empty and Hotpress.