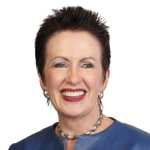 Clover Moore is the longest serving Lord Mayor of Sydney. She is the first popularly elected woman to lead the City of Sydney and previously served in the NSW Parliament and on the City and South Sydney councils.

From March 1988, Clover was continuously elected to represent the Bligh/Sydney electorate as an independent MP in the NSW Parliament. She was forced to resign on 21 September 2012 after a state law made it illegal for her to continue in both roles.

An opinion piece in the Sydney Morning Herald once said: "In her 20 years as MP, with more successful private member's bills than anyone in a century, Moore has done more to keep the bastards honest than Don Chipp ever did.”

Throughout her public life, Clover has championed progressive policies.

When she held the balance of power alongside other independents in NSW, she delivered a charter of reform, called the most radical state political reform agenda of any Westminster Parliament in the 20th century.

Clover is an arts graduate of Sydney University. She has two children, Sophie and Tom. She lives in inner-Sydney Redfern with husband Peter and and two staffies, Bessie and Buster.

Further information is available at https://www.cityofsydney.nsw.gov.au/council-governance-administration/open-access-information